“No sweep like the one you're fucking in, as they say.”

Normal syntax, uses all punctuation. Adds a *_________ to his sentence when he’s done talking.

Call me Gor-Gor ♫
Tagora Gorjek, or "Gor-Gor", is a young troll living in Outglut during the time period of Hiveswap and Hiveswap Friendsim. Tagora was first revealed during the Hiveswap Troll Call event alongside Cirava Hermod on January 24th, 2018. His bullet points were "call him gor-gor", "antisocial climber", and "if he's talking you've already lost". He was then featured alongside Vikare Ratite in Hiveswap Friendship Simulator: Volume Four. He was designed by Poinko. His bullet points were altered as from December 6, 2018 to "Call him GorGor", "A luxury few can afford" and "If he's talking you've already lost".

Tagora may derive his name from Tagora, an alternate name for Eupterote, a genus of moths. It may also be a reference to the Talbot Tagora, a car developed in the 1980s, which may be a reference to his practice similar to ambulance-chasing. It is also a possible reference to Pythagoras, as his sign resembles a triangle. It could also come from "Agoraphobia," an anxiety disorder characterized by fear of potentially embarrassing situation that cannot be easily escaped or avoided causing the inhabitant to (commonly) not leave their home.

Tagora is a tealblood who works in a law enforcement job of somekind, probably a legislacerator. In the events of Hiveswap Friendsim: Vol. 4, he runs into the MSPA Reader after they get hit with a scuttlebuggy by an unknown troll. He offers his services to them, charging the player 50+ for an introductory fee, a gimmick that continues throughout the entire route as he keeps charging them an unknown currency (possibly troll caegars) each time he finishes a sentence (usually 10+, but an extra amount is added or subtracted depending on subject).

When Tagora realizes the player is actually an alien, he freezes slightly but then calms himself, lying to them that he's worked with aliens before and that their situation shouldn't be an issue and adds 200+ to their bill. He asks the player to move their neck and then tells them that they might have to be injured further to prove that their case is convincing. He asks how the MSPA Reader would like him to help them.

If the player lies to Tagora that they have plenty of money to go around, Tagora will lead the player to his hive, which also doubles as his office. While he prepares the necessary paperwork, he instructs the player to make use of his washroom. Should the player agree to clean up, Tagora will be somewhat impressed with the player's generous use of his rare and expensive rainbow drinker serum. After Tagora leads the player outside to view the full effects of the rainbow drinker serum, he will become distracted and rather hesitant about mentioning the player's pending court case. When a blue-blood stumbles across the player and Tagora, Tagora is momentarily speechless. The player then puts on an act to resolve the delicate situation, frightening the blue-blood away while Tagora regains his composure. Expressing that it was perhaps a better option to work with the player, Tagora will offer the player to be his first legitimate business partner.

If you ask if he does pro bono work, he says he doesn't do charity and walks away from the player.

If the player opts not to take a shower, Tagora will instruct the player to look as pathetic as possible to see how much sympathy can be garnered. Tagora gets momentarily irritated with the player's disheveled appearance, and insists that the player wait a safe distance away while he prepares the documents needed. Tagora gives the player a brief and vague run-through of the contract, and gets the player to sign it. While taking the player back to the scene of the accident, a blue-blooded troll appears. The intruder's sudden arrival causes Tagora to freeze up, but he quickly dons a professional and charming facade to smooth things over. When the player attempts to introduce themselves, Tagora discreetly warns the player not to do anything overly embarrassing. The player then starts hobbling around, exaggerating their injuries. This causes the highblood to scoff at Tagora before shoving past the player and Tagora in spite.

Incensed at losing a good networking opportunity, Tagora's behavior becomes increasingly erratic as he struggles to contain his growing anger. Deciding that the player was an ultimate waste of his time and efforts, Tagora leads the player to a shabbier part of town and declares the player guilty. Tagora then attracts the attention of a nearby Imperial Drone and sics it on the player, causing the player to flee. Before the player runs off, Tagora causally informs them that there is a sewer in the next street, though he doubts the player's chances of making it out alive. In the off-chance that the player does survive, however, Tagora tells the player to check their pocket so they may pay him for all his services.

Tagora makes a brief appearance in Hiveswap Friendsim: Vol. 8, giving Tyzias Entykk a polite greeting upon meeting her at the bookhive. He makes a snarky comment or two regarding her unkempt appearance, though refrains from saying anything overtly offensive to his classmate. After a bit of banter with Tyzias, he leaves her in peace so that she may add her final edits to the project they're currently working on. Just as Tagora is about to head on out, he casually asks the player whether they would like to drop by later.

In Hiveswap Friendsim: Vol. 12, Tagora makes another brief appearance: calling the player in a rather inopportune moment to discuss a change in behavior in Galekh Xigisi. When Tagora realizes that the player had broken into his office, however, his initial cheeriness evaporates and he reverts to his cold facade. After chastising himself for being foolish enough to believe the player merely wanted to be friends with him, he ends the call, adding that he would like to be reimbursed for his time and services.

Tagora is a sketchy legislacerator with dubious morals, and swindles quite a sum from the player mere moments upon his introduction. He charges quite a hefty sum for the different services rendered, which quickly places the player into debt. This may be a callback to the third bullet point on his Troll Call card, as the player starts losing a lot of money the moment he starts talking. However, he is known for making reductions if he happens to be impressed with the player's actions.

While Tagora might appear to be a slick and confident character, there are times when he loses his composure. He visibly freezes and begins trembling when the blue-blood appears out of nowhere, and momentarily becomes speechless. This might imply that he has less-than-stellar social skills or is not particularly good at managing himself during awkward social situations. This is best illustrated when he loses his cool entirely when the player ruins his networking opportunity: Tagora begins pacing back and forth, grabbing at his face and hollering right after insulting the player's intelligence. It is also noted that he will start laughing unnaturally in between bouts of muttering to himself. Tagora may also have a cruel streak in him, since he sics an Imperial Drone on the player as means of retribution for the lost networking opportunity.

Despite his shifty nature, Tagora still knows when to thank the player for saving him from a socially awkward situation. In his gratitude, he offers the player to be his first legitimate business partner, believing that their combined skills (his fast talking, the player's ability to improvise and act) meant being able to tackle bigger and better things.

Tagora is also noted to pay a lot of attention to personal hygiene and general cleanliness. When the player opts not to take a bath, he becomes equal parts irritated and disgusted when the player tries to approach him in their unkempt appearance. Tagora also has a large collection of bath products stashed in his washroom, and uses rainbow drinker serum to highlight his cheekbones. The player also mentions that Tagora's hair appears to be heavily infused with product upon their meeting, and Tagora's hive is described to be immaculate and minimalist-themed.

As a teal-blood, Tagora is very formal in speech and manner, preferring to keep things in a strictly professional manner between him and the player. He also becomes very polite when a superior comes his way, though he doesn't particularly enjoy the notion of sucking up to those above him; he claims that doing so would grant him certain advantages. In addition to that, he also keeps a swear jar as a reminder to watch his language. Though it should be noted that he reclaims all the money placed in said jar when he is really irate.

Tagora seems to have a turbulent relationship with the blue-blood that makes an appearance in the events of Hiveswap Friendsim: Vol. 4. He outright states that he hates said troll, which might imply that the interloper is his kismesis. As of Hiveswap Friendsim: Vol. 12, it is confirmed that said blueblood, Galekh Xigisi, is indeed his caliginous crush. Tagora had confided in the player regarding several key details of the nature of their relationship, most of it pertaining to the duo's tentative and pitch-ish flirtation. When Galekh sends Tagora a picture of his new tattoo, Tagora rapidly texts back about how much he loathes Galekh's recent body modification. As such, it can be assumed that the two have a somewhat stable kismesissitude.

Tagora's lusus is a ferret, and he seems to have a fairly good relationship with his custodian. This can be assumed from the fact that the ferret is first seen on a lavish throne and playtower combination, which may suggest that Tagora cares about his lusus. While Tagora only communicates with his lusus via eye contact, the two seem to understand each other.

In Hiveswap Friendsim: Vol. 8, he makes a brief appearance when greeting Tyzias Entykk and asking how their group project was going. Upon seeing Tyzias’ dishevelled appearance, he makes a snide comment or two, but doesn’t actually say anything particulalry damnning to his fellow tealblood. The two are actually classmates, and frequently work together to finish their assignments. Apart from that, he shares information with her on a regular basis. Despite Tyzias’ apparent irritation with him, the two are mostly civil with one another and get along quite well.

In the same volume as above, Tagora is shown to be quite fond of the MSPA Reader, referring to the player as his associate. Not only that, but he was impressed enough with the player’s quick wit to brag about the player to his fellows, notably Tyzias. Before he leaves Tyzias in peace so that she may complete her final edits, Tagora casually asks whether the player would like to drop by later, to which the player agrees. As such, it can be inferred that Tagora genuinely likes the player. However, when Tagora catches the player breaking into his office during the events of Hiveswap Friendsim: Vol. 12, he is stunned to see the player backstabbing him in such a manner. Even though Tagora retains his composure throughout the following exchange, it is still clear that he feels deeply betrayed by the player's actions. While he coldly states that he'll continue being the player's business partner, the fact that he fully intends to charge the player for his time and services indicate that the trust between them is completely gone.

The initial good ending screen from Friendsim that is missing Tagora's horns. 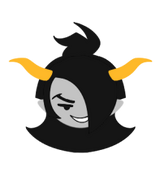 Retrieved from "https://mspaintadventures.fandom.com/wiki/Tagora_Gorjek?oldid=245923"
Community content is available under CC-BY-SA unless otherwise noted.