For the album, see The Felt (album). 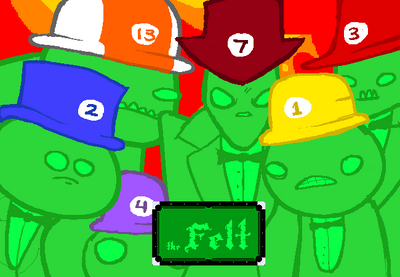 The Felt are a gang of time travellers that operate across numerous universes and timelines in the service of their master, Lord English. Their most notable incarnation appears on the planet Alternia, where they are a rival gang to the Midnight Crew.

The Felt use a billiards or pool motif to their appearance and character, in contrast with the playing card theme of the Midnight Crew. The standard members of the gang are completely green, besides a brightly-colored hat with number on it corresponding one of the 15 non-cue balls. 8 and below are solid colors, while 9 and up are striped and use white flanks on their hats. Their headquarters on Alternia is an entirely green mansion, and they have at least one other base in a building on the green moon. The recurring use of this color plus the name "the Felt" itself correspond to the green felt used to line pool tables, and the border around their title in [S]MIDNIGHT CREW: ACT 1031

is even shaped like a pool table. According to Caliborn, their "skin" also feels like the felt material used for pool tables.

The regular members of the Felt, numbering through 1-7 and 9-15, are leprechauns originating in Caliborn's dead session. Each planet Caliborn destroyed in his game unlocked one as a new minion, dressed in appropriately elf-like or leprechaun-esque garb including pointed hats of the same colour and number. The leprechauns each have different abilities over time, and have a general fixation with clocks and timepieces. They initially lack names, with Caliborn simply labelling them "yellow hat" and "blue hat"; Andrew Hussie first suggests giving them mobster-themed names, as “mobsters are cool”

. This would result in the gang's later prohibition-era gangster aesthetic while under the service of the adult Caliborn, Lord English.

The Felt are chiefly encountered by the Midnight Crew during the comic's first intermission. After Lord English "knocked down" one of his casinos, Midnight Crew leader Spade Slick vowed revenge, and so the Crew stormed the Felt's hideout with the purposing of wiping out every member, destroying their 1000 clocks, and plundering Lord English's vault to make him pay. By the end of the intermission, all of the Felt except Snowman, Lord English, and Doc Scratch are dead, at least in the timeline Spades Slick finds himself in, though several of the "dead" numbered Felt return in Act 5 Act 2's Scratch interlude due to the gang's capacity for inter-timeline travel.

In the aftermath of the destruction of the A2 universe and Andrew Hussie's death at the hands of Lord English, the rebuilt cybernetic Spades Slick used Die's doll while in the void to revive

the leprechaun members of the Felt (he chooses to exempt Snowman, who he claims reviving “could have some really weird consequences”) under his command. He recruits Ms. Paint to serve as the gang's new 8-ball member. The gang proceeded to accompany Slick to the B2 session. Intent on fighting what he identified as his rival Lord English, Slick deployed the gang as a distraction to fight Jake English while he flew off. The fourteen leprechauns proceeded to participate in [S] Collide, where they were all defeated besides Crowbar.

In the MSPA Snapchat, it is revealed that Jack Noir became the leader of the Felt and, under his direction, they turned Biscuits' oven into a rocket to make it fly to Earth C's moon from the victory platform. One of the rockets exploded, unfortunately, causing the oven to fall to the moon with Jack still riding on top. The last time Jack is seen is being captured and presumably hypnotized (going by the red markings in his eyes) by Jane Crocker using a Crockercorp collar device. She then begins using the ripped cloth of Ms. Paint's outfit as a leash, with Jack's arm bleeding.

The Felt's mansion, based on pictures of the real world Carson Mansion located in Eureka, California, evokes the practice of Middle Ages feudalism, where the economic center of a peasant settlement was the manor of the Lord. The presence of Karkat's exile terminal within the mansion's vault indicates that it may be built at the former location of Terezi's hive.