The Lone Gunbirds, consisting of Frohike, Langly and Byers, are (or were, in the case of Frohike and Langly) Jude Harley's beloved pet pigeons, stated by him to be carrier pigeons. Described by Jude as his "top agents", he enlists them one by one to deliver a pouch containing red and green marbles to Joey in Hiveswap: Act 1; however, only Byers is successful in this endeavor.

Byers is then collected by Joey and carried in her inventory throughout the game, and can be used on objects in the environment to yield unique interaction text.

The first Gunbird, Frohike, is a red-brown bird, with the longest neck of the three. He is initially stated by Jude to be his favourite. He is the first to be selected to deliver the marbles, and suffers an unpleasant fate at the hands of a monster.

The second Gunbird, Langly, is a traitor grey-white bird with pink hues and a greenish breast. He has a prominently puffed-out chest and a narrowed eye, lending him a sly look. He is the second to be chosen to deliver the marbles, but abandons this quest and flies away into the night.

The third Gunbird, Byers, is a black, white and grey bird, also with a greenish breast, and a plump, rounded shape. He is the last bird selected to attempt to deliver the marbles, but is the only one of the three who is successful, winning him much praise from Jude. Joey then takes him with her as a companion on her journey.

When we are introduced to the Lone Gunbirds, they are in their cage in Jude's tree house. Jude recieves a message from Joey, explaining that the green and red marbles she needs to complete the Trophy Room puzzle and release the attic key are not in the Trophy Room, as Jude had thought. Jude instead has a large collection of different colored marbles in his tree house, but cannot leave himself due to the monsters outside.

Jude decides to enlist his "top agents", the Gunbirds, to fly the marbles to Joey in a pouch tied to the leg of one of the birds. First selecting his favorite, Frohike, to deliver the pouch, he ties it to the bird and releases him. Frohike flies towards the house, but is immediately eaten by a flying monster which crashes through the kitchen window of Half-Harley Manor, killing Frohike and causing Jude great distress.

Warily, he takes out Langly, and attaches another pouch (with another set of marbles) to him, and releases him in the same fashion. However, he simply flies off into the night, perhaps not wanting to suffer the same fate as Frohike. Jude shouts angrily after him, calling him a "coward" and "blackguard", before, increasingly uncertainly, he approaches Byers, the last remaining Gunbird, with a third pouch. Much to Jude's delight, he succeeds in flying the marbles into the Manor, entering through the broken kitchen window.

After entering the house, Byers finds himself being harassed by the monster that had consumed Frohike. Joey rushes to save him by distracting the monster and then incapacitating it by throwing spices into its mouth. She then coerces Byers down from the fridge with a dry cracker, and stores him in her Sylladex, retrieving the pouch of marbles in the process. Byers then remains with Joey for the rest of her journey, making him the only other known Earth lifeform to visit Alternia (Lil Cal, while having visited Alternia from Earth and having contained a soul, is not here considered a lifeform, nor can he necessarily be considered of Earthly origin). 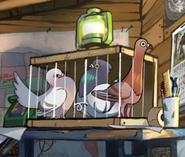 The Lone Gunbirds together in their cage.

Langly and Byers after Frohike makes the ultimate sacrifice.

Treacherous Langly is the second to attempt the journey.

Byers as the last remaining Gunbird.

Couragous Byers sets off on his successful delivery mission! 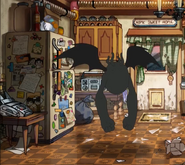 A monster harasses Byers on the fridge.

Retrieved from "https://mspaintadventures.fandom.com/wiki/The_Lone_Gunbirds?oldid=246580"
Community content is available under CC-BY-SA unless otherwise noted.