For the music album of the same name, see Medium (album). 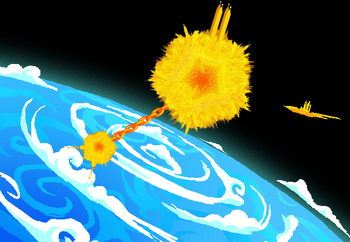 “"Medium" has a fairly obvious double meaning. It is literally a middle ground, the wide band of spherical space in between Skaia and the Furthest Ring [...] It is also a medium in the sense of a canvas for paint. An ether for an emergent reality. [...] it has mystical, unexplained properties for sustaining life, specifically the players. It's not quite literally a vacuum, since people can breathe in it, though it is not necessarily a field of breathable atmosphere. In the same sense, it magically powers houses severed from the electrical grid. ”
— Homestuck: Book 2 commentary

The Medium is a mysterious realm which forms part of the Incipisphere. It was first introduced when John's house was sent to the area when he bit into a Cruxite Apple. He is later joined by Rose, Dave and Jade.

Nannasprite describes The Medium as "a ring of pure void, dividing light and darkness". The Medium seems to be the main body of the Incipisphere where the planets reside, with a kingdom of darkness outside of it and one of light within it. To be completely specific, Hussie defined it as terminating at The Veil.

The main goal of Sburb is to build up through the Medium to The Seven Gates, eventually reaching the realm of Skaia at the Incipisphere's center. The starting point of this journey is each player's individual planet. Each planet has something to do with the player's title and, more importantly, their personality. Imps, Ogres, and many other opponents must be fought by the players as they build upward. Strangely, players still receive electricity and internet access, even though the wires are clearly not connected

to anything. Rose theorizes that the game provides these services so as to not give the players unnecessary handicaps - that is to say, navigating a dark house or being unable to communicate with other players in the session - early in the game.

It should be noted that the trolls' planets were destroyed, one after the other, by Jack Noir and that they also lost their Prospit and Derse.

So far, all void session planets have had themes of death and desolation. This is fitting, because this means the game is a void session, and cannot bear fruit. Whether this is an intentional game mechanic or a glitch remains unknown. 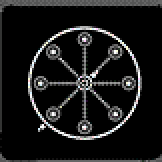 displayed in the Skaianet Laboratory's primary session terminal seems to suggest that there are eight planets, each with seven gates between it and Skaia. The significance of this was subject to speculation for a long time. However, it is now most likely that it foreshadowed the 8 player session of the pre- and post-scratch kids.

Retrieved from "https://mspaintadventures.fandom.com/wiki/The_Medium?oldid=239825"
Community content is available under CC-BY-SA unless otherwise noted.