The Reckoning is a twenty-four hour event in Sburb within Homestuck that occurs when the forces of dark achieve their inevitable victory over the forces of light on the battlefield. Due to the direct actions of the victorious dark forces, this results a rain of meteors from The Veil, which will eventually destroy Skaia if not stopped. To defend itself, Skaia uses portals to transport the meteors elsewhere in time and space, specifically to the host planet of the Sburb session. Due to The Medium occupying a separate location in space time Skaia can send the meteors to various points in time of the host planet's history. Most of them arrive at the same time, namely during the time the players start their Sburb session, motivating them to enter the Medium in the first place, which creates a circular paradox.

In a normal session, the Black King eventually captures the White King's scepter and uses it to initiate the Reckoning. After this point, the meteors are sent towards Skaia, starting with the smallest and gradually sending larger ones. The players have twenty-four hours to defeat the Black King and end the Reckoning before the largest meteors destroy Skaia and render their session unwinnable.

The pre-scratch kids' session of Sburb, however, had the Reckoning occur much earlier than it is supposed to in an average session, on account of Jack Noir. 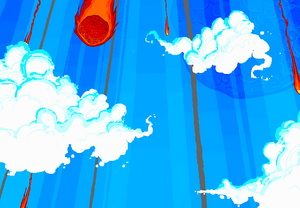 After killing the Black King on the Battlefield and thoroughly wrecking the white and black armies, not to mention the planet, Jack Noir receives the White King's Scepter from the Courtyard Droll. Jack then uses it to begin the Reckoning early, sending the Veil's meteors towards the ravaged Battlefield.

There is no Reckoning in the post-scratch kids' universe. This is due to the lack of any prototyping, meaning that the Battlefield remains forever in its initial stalemated state.

The Reckoning is an important part of the story of the paradox clones. At some point after being "born", each paradox clone is transported onto one of the meteors in the veil, and with it, through Skaia's defense gates, to the player's home planet, into the past, thus creating them in the first place.

After the scratch is activated, the meteors carrying the paradox clones are sent to an alternate version of their home planet. Other meteors don't get this treatment.