Throwingstarkind, abbreviated to thrwstarkind, is a Strife Specibus in Homestuck. It is the strife specibus of Sollux Captor, but he has no use for it due to his potent psychic abilities. 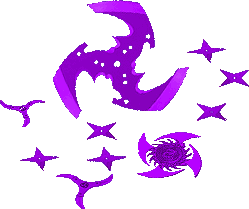 Sollux uses these to slice up his empty and pointless strife card. He also accidentially takes out one of his beehouse mainframes. 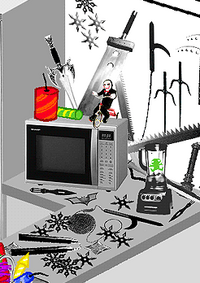 Dave's Bro owns several shuriken, batarangs, and other throwing stars. He has never been seen using them. Dave finds them in the kitchen of their shared apartment along with other weapons.

Suitarangs were created by Dave Strider when he combined a batarang and a Midnight Crew poster.

They are based on suits from a deck of cards. Each suitarang appears to be two of the same suit connected, in the case of the black suits, at the base, so that sharp point of the spades and the rounded part of the clubs are on the ends. It is impossible to tell if the diamonds are connected at the top or the base. The hearts are connected at the top, so that the sharp points on the bottom face out. The heart suitarang also resembles a pair of wax lips, Hearts Boxcars' most prized possession. They could also resemble a pair of Hunk Rumps. Dave has yet to be seen using them in combat, and may in fact never do so, as he specializes in close combat, and has trouble weaponizing his sylladex.

, and then later on Dave is sleeping on them