Carefree Princess Berryboo ♫
Tirona Kasund is a young Alternian troll living in Outglut during the time period of Hiveswap and Hiveswap Friendsim. She was revealed during the Troll Call event alongside Lynera Skalbi on January 1st, 2018. Her bullet points were "tattleterror" "His Honorable Tyranny's littlest fan" and "ruthless calculus". Tirona was featured alongside Galekh Xigisi in Hiveswap Friendship Simulator: Volume Twelve. She was designed by Poinko, who also confirmed her pronouns. Her third bullet point was altered as from December 6, 2018 to "Ruthless memeagandist".

Her first name could be a reference to Daniel Tirona, a Filipino revolutionary leader who rebelled against Spanish colonial rule in 1899-1902. Ironically, Tirona is a follower of a dictator herself. Kasund could also be derived from kasundo, which is Filipino for "agreement", tying into her first name being a possible reference to a Filipino national leader.

Tirona is a tealblood that works in a law enforcement job of sorts, though Tirona mostly spreads pro-Empire sentiments via fake Chittr accounts that distribute biased memes. In the events of Hiveswap Friendsim: Vol. 12, she bails the player out of jail, instructing them to be quick and silent.

If the player chooses to ask questions, Tirona becomes unimpressed with the player's stupidity. After giving the player an umbrella and some terse directions on where to stay low for the time being, she shoves the player out of the building, leaving them alone on the street.

Should the player suggest breaking into Tagora's office, Tagora will call the player for a little friendly chat. However, Tagora quickly recognizes his office and is betrayed that the player would backstab him so callously. The player's bid to come clean is disregarded, and Tagora ends the call after informing the player that he would like to be paid for his services. Miserable, the player turns to Tirona for comfort, but she had disappeared.

Should the player suggest breaking into Tegiri's office, the player will successfully get past the password on the third try. However, a katana swings right for the player's head, startling them. The player narrowly ducks the blade, Tegiri's pre-recorded voice taunting the player for trying to sneak into his office. Unfortunately for Tirona, she got impaled by the sword, much to the player's horror.

If the player chooses to follow her, Tirona leads them to her office. After exchanging pleasantries and clearing the player of all criminal charges, Tirona states that she would like the player to help her break into other trolls' office so that she may find incriminating evidence. Despite the player's reluctance to turn on their friends, they comply because Tirona had freed them from prison earlier. Should the player suggest breaking into Tyzias' office, Tirona will become rather annoyed when the player starts fiddling with their phone instead. The player lies that they're looking for relevant information on Tyzias, even though they're actually letting Tyzias know that someone intends to break into her office. The player eventually gets past the security system, and Tirona wastes no time rifling through all of Tyzias' documents. When her search goes nowhere, Tirona loses her temper, invoking the player's sympathy. Just as the player is done reassuring Tirona, Tyzias enters the room and bluntly tells Tirona to get lost. Dragging the player to the furthest corner of the office, Tyzias thanks the player for the text and chats with them for a bit. Tyzias then allows the player to leave so that she may begin reorganizing her scattered belongings, and Tirona is astounded that the player is still alive. This leads Tirona to believe that being companions with the player is a worthwhile decision.

Tirona is a young troll eager to prove herself useful for the Empire, and would go out of her way do make herself useful for Trizza's cause. This is made evident when she outright states that her main job is to spread memes so as to create support for the heiress, and has a troll well-versed with technology to man the fake Chittr accounts she'd created just for the sake of disseminating propaganda. She is fairly confident that her efforts with "Memeaganda" will someday be recognized by her superiors, which also means that she can get some bonus allegiance points. Her main desire is to work alongside His Honourable Tyranny, believing that being sent out to apprehend criminals is far dangerous than the off-chance of being eaten by the monstrous judge.

While she might be competent at her job, there are times where Tirona can come off as immature. For one thing, she believes that ratting someone out as a rebel spy is a perfect way to get a one-up on the others, since she's quite desperate to prove herself superior to the other teals. When she is unable to find anything particularly incriminating in Tyzias' office, she flies into a frustrated rage and thoughtlessly rumages through all the documents in the hopes of finding something useful. It should be noted that most of her infuriation stems from the fact that she's young and not at all inclined towards violence, meaning that being knowledgeable is the only thing she has as leverage against her fellow teals.

Despite her shifty inclinations, Tirona is a friendly character and chats amiably with the player throughout the route. She only becomes exasperated with the player when they decide to mess with their phone instead of breaking into Tyzias' office. However, Tirona is prone to abandoning the player when things go wrong: when the player accidentally accepts a call from Tagora, Tirona high-tails it out of the office instantly; when Tyzias catches the player and Tirona in the office, Tirona flees the room right after Tyzias bluntly tells her to hit the road.

Tirona doesn't appear to like her fellow teals by much, since she yearns to prove that she's better than the lot of them. All this is done for the sake of being able to work with His Honourable Tyranny in the future, and Tirona's more than willing to use dirty tricks to sabotage others.

Tirona is outright fearful of Tyzias, since the latter is surrounded by frightening (but untrue) rumours. When Tyzias orders Tirona to get out, the younger teal darts out of the room without a word, eyes wide and filled with terror. After the player emerges unharmed from Tyzias' office, Tirona is surprised that they're still alive.

Tirona appears to have what she sees as a fairly good relationship with her unnamed contact, likely Doc Scratch, as she speaks fondly of them when mentioning them to the player. According to Tirona, said troll often sends her to run errands, and lavishes her with praise when the task is completed. As such, it can be inferred that the two are in her eyes friends to some degree.

A prototype design of Tirona. 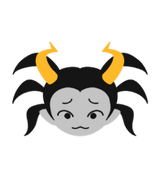 Tirona's sprite from the trial

Retrieved from "https://mspaintadventures.fandom.com/wiki/Tirona_Kasund?oldid=244982"
Community content is available under CC-BY-SA unless otherwise noted.