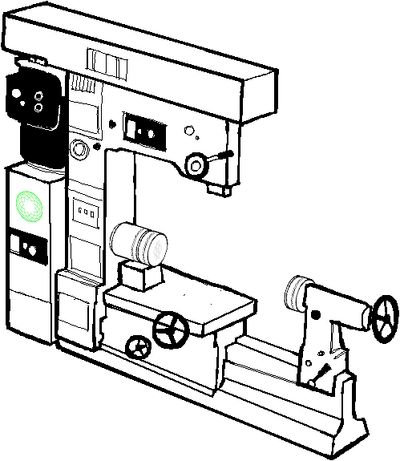 The Totem Lathe is a piece of machinery that a player can deploy in the Sburb Beta.

The Totem Lathe is used to carve Cruxite dowels with patterns, which are dictated by Punched cards and Pre-Punched Cards. The Lathe, in combination with the Punch Designix and Alchemiter, allows players to alchemize objects, such as the Cruxite artifacts used to enter The Medium, various weapons and outfits, and other miscellaneous objects.

The totem carved is a direct representation of the Captchalogue code punched into the card. The totem is shaped by a laser that is programmed to carve to different depths in a Dowel depending on the values in the code used. For example a totem carved with “11188111” would cause the laser to carve the beginning of the totem slightly thinner than normal, with a dip in the middle. Proof of this theory is shown when a totem carved with the code “11111111” was completely regular, just slightly narrower than an uncarved totem. Presumably the totem carved from the code “!!!!!!!!” would be a very slender cylinder. This would explain the fact that an empty captchalogue card's code is “00000000”, as it would cause the laser to not edit the totem.