The tree stump is an object in Jailbreak, Problem Sleuth, and Homestuck that is surrounded by a powerful cosmic magnetism towards suicide

which is facilitated by the presence of a pistol buried beneath it.

The suicidal urge may stem from the circumstances of the stump's original appearance in Jailbreak: After the two prisoners escape at long last from the prison and wind up near the stump, the uninjured man attempts to run off into the forest with his friend. However, the other man has died, and after all they went through together, he felt hollow going on living without his friend and soon killed himself. Rather than the stump causing this, the man could feasibly have been drawn to this by the trauma of the situation, enacted by the gun he brought there himself. This tragic backstory may be what causes a gun to be buried under the mystical stump in the future along with the suicidal urges. All future iterations of the stump also feature the severed harpoon which the injured man shot the stump with, and ultimately died from.

The stump's location is inconsistent, suggesting that either there are multiple stumps, or that the strange cosmic forces that surround it allow it to be in multiple locations. In Jailbreak the stump was found outside the city after the prisoners escaped from the prison, which Problem Sleuth reveals

the city to be the Imaginary City Streets. However Jailbreak's reset shows the stump to be located near a Small Cottage which Problem Sleuth reveals to be in the four kingdoms on the opposite side of the universe. Meanwhile Problem Sleuth itself shows the stump as being located in Death's Game of Life and also the place inhabited by the MSPA Reader when they have a bad reaction to a new update 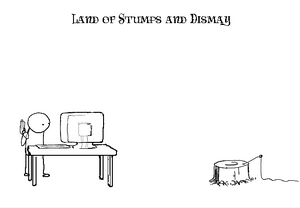 (LOSAD) indicating that it is the Reader's planet in The Medium. The Reader is later seen

In Volume Two of Hiveswap Friendsim the MSPA Reader finds the stump just outside of Cirava Hermod's hive on Alternia after Cirava writes a callout post about the MSPA Reader.