Uses Ψ instead of the letter w.

Wish You Were Here ♫

to be killed by the current empress, the Condesce.

Her first name, Trizza, is a plait or a braid in both Sicilian and Maltese languages. This is possibly a reference to Meenah's hair, or maybe her own hair. Her last name is likely derived from Tethys, a greek Titaness of the sea. Saturn also has a moon named Tethys.

"Tethis" was a suggested last name for Feferi from Zuki. Tethis is the name of a sea Troll appearing in the first Discworld novel, The Colour of Magic. Tethys is also the name of an ocean, which matches up with her fish like appearance. Tethis also sounds similar to Teuthis, an archaic name for several genera of squid.

Trizza was hatched sometime after the Summoner's uprising. At some point she became the leader of an oppressive regime which she used to enforce the rule that all must laugh at her jokes. Due to her blood, Gl'bgolyb presumably serves as her lusus.

Judging by her actions and her activities on Prongle, Trizza can be described as cruel, extremely vain and tyrannical. She has a deep-seated hatred of low-bloods, and will not hesitate to cull them even if they so much as think of acting out of line. Her hatred of them runs so deeply that she hardly thinks of them as people, and will send drones to attack low-blooded neighborhoods for little reason other than to use the burning buildings as a selfie backdrop. She apparently views aliens with the same level of disgust.

She has also been described as the "2nd best at memes."

The Heiress
All your hives are belong to us. 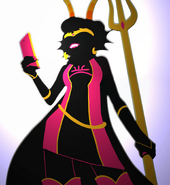 About to take a selfie.