Types m's and w's four times, uses all punctuation except periods, all lowercase.

Seer of Same-Color Scalemate Combos ♫
(renamed "Single Female Lawyer")
Tyzias Entykk is a young Alternian troll living in Outglut during the time period of Hiveswap and Hiveswap Friendsim. Tyzias was first revealed during the Hiveswap Troll Call event alongside Zebede Tongva on November 11th, 2017, kicking off the Troll Call event. Her bullet points were "sleeps once a week", "ask her about her controversial theories regarding traditional jurisprudence", and "that's not coffee". She was then featured alongside Chixie Roixmr in Hiveswap Friendship Simulator: Volume Eight. Her bullet points were one of the only ones to remain unchanged as from December 6th, 2018.

Her first name can be roughly translated into Tisias, a Greek philosopher on logic and debate. Her last name is possibly derived from Antyk, the name of an anti-communist Polish operation responsible for counter-propaganda; potentially alluding to her anti-establishment views.

Tyzias is a tealblood living in Outglut. She is a young troll who studies to become a legislacerator with a group of other tealbloods, and aspires to create positive change on Alternia for the better.

During the events of Hiveswap Friendsim: Vol. 8, the MSPA Reader gives her a smile in hopes of befriending her, but Tyzias was too engrossed with her own matters to notice the player at first. She trips over a rock, scattering all her papers and books. The player then rushes to her side to help her.

If the player chooses to help Tyzias pick up her papers, she'll bring up the fact that the player can't read, telling the player that not only is it obvious they aren't a troll, that she's also heard of the player from Tagora Gorjek, stating that “Teals talk [...] Unfortunately”. She then begins to help the player restore order to her papers. Just as the player was starting to make headway, another gust of wind comes by, messing them all up again. The player notices how exhausted she is, and suggests that she take a breather. Tyzias will agree, saying “fuck it” before running into her hive and putting back her papers, only keeping one book and her mug. She lets the player lead her to the player's hideout, despite her not being thrilled by the outdoorsy-ness. Despite her grouchiness, Tyzias begins talking about Alternian society and her role as a teal.

When the player asks if she could quit her legisclator training, she replies “yeah i can quit [...] if i wwwwant to get culled” implying that she doesn't have a proper choice in the matter. She rants about injustice and how the law system on Alternia is completely biased. After expounding more on the matter and bringing up historical figures that tried to alter the system in their different ways, Tyzias reveals her desire to bring true justice to Alternia. The player agrees with her sentiment, and Tyzias admits that hanging out with the player was actually quite nice. When she starts yawning once more, the player offers her to take a short nap on a pile of blankets. Tyzias accepts the players offer and rests up while the player gazes at the unfamiliar constellations.

If the player suggests that reorganizing her papers and files can take place somewhere less windy, Tyzias will agree and lead you to the bookhive she'd meant to visit all this while. After the player asks about what she's working on, Tyzias will briefly explain her legislacerator assignment, expressing her distaste over the fact that most resources on Alternia are biased, if not outright propaganda. Tagora makes a brief appearance, much to Tyzias' irritation. After a bit of banter, Tagora relents and allows Tyzias to manage her things in peace.

While sorting through her documents, Tyzias realizes that a particular handwritten note is missing from the stack and painstakingly searches for it in the pile once again. The player then guiltily explains that the page might have been blown away while they were distracted earlier. Even when the player offers to recreate the lost page, Tyzias is still heartbroken over its loss as it was her personal take on a very sensitive topic she'd stumbled across while doing research. To make matters worse, if her handwriting is recognized by the authorities, she might get culled for harboring anti-establishment agendas. Overwhelmed by despair and fear, Tyzias tries her best to hide her tears while the player feels downright terrible. Once Tyzias regains her composure, she begins gathering her things so that she may retrace her steps to find said missing page. The player jumps to help her, but Tyzias insists that the player stays behind and leaves the bookhive without so much of a backwards glance.

Tyzias makes a brief appearance in Hiveswap Friendsim: Vol. 12, walking into her office while Tirona and the player are busy rooting around for incriminating information. Instead of getting irritated, Tyzias bluntly orders Tirona to get lost while she and the player have a private talk. The moment Tirona is out of earshot, Tyzias thanks the player for letting her know that someone intended to break into her office during her absence. After chatting with the player for a bit, she lets them return outside so that she may start reorganizing her documents.

She makes another appearance in Hiveswap Friendsim: Vol. 17; in Daraya's route, the player runs into her while taking Daraya on a stroll through town. In an attempt to help Daraya out, the player introduces the two trolls to one another so that meaningful conversation can take place. However, as Daraya goes out of her way to be incredibly dismissive and overly-cynical about Tyzias' plans for change, Tyzias becomes understandably angry with the jadeblood. However, the player intervenes before a fight can take place, and Tyzias accepts Daraya's eventual apology. Tyzias succeeds in advising Daraya, and the two agree to help each other more in the future (Tyzias believes that access to the jadeblood archives could be of immense use in her studies). In Nihkee's route, Tyzias is seen studying at Stelsa's hive, and the two have dinner with the player after hearing out their problems.

Tyzias appears in Hiveswap Act 2 in the Teal and Jade car. After Daraya is accused by Lynera of stealing the book "Fresh Teeth" and Marvus enters the car Tyzias suggest they try out her defense system idea. She and Joey work together as the defense and regardless of the trial ending she is satisfied with her experiment and it is revealed she knew the truth the whole time.

Tyzias is an astute and studious troll, spending most of her time researching Alternian law and plenty of other subjects pertaining to their justice system. She mentions that she often stays up to pore through said subjects, which has made her sleep deprived over time. Despite all this, she is well-versed with the proceedings and details of Alternian law, and has discovered several loopholes in the system that can be used as leverage. Apart from all this, her diligent studying has also allowed her to know of historical figures wiped out from Alternia: she knows of The Sufferer's bid for peace and equality, and The Summoner's military rebellion to fight against injustice.

Since Tyzias is fully aware of how messed-up the system is on Alternia, it pains her to witness the pain and suffering inflicted on the masses, particularly lowbloods. She laments the fact that there is already enough anguish in the world, even when there is no one enforcing a brutal caste system. Even though Tyzias explains that a legislacerator's role is to uphold the harsh hemospectrum, she fully intends to pass her exams so that she can be a major player in Alternia's legal system. Only then can she create positive change for troll society, as certain things can only be altered from the inside. As such, it can be inferred that she has a big heart and wants real justice for everyone.

Apart from this, she is noted to be quite mellow in mannerisms, and has a rather sluggish manner of speaking. Even when riled up, she doesn't become excited or animated; the only change in demeanor seen was just her sitting a little straighter. When she realizes that the player had lost track of a particularly important page of hers, she does not explode in rage or lash out at the player, instead reprimanding herself for trusting the player before weeping silently. The only time where she really loses her cool is when the breeze messes up her stack of papers once more, resulting in her sinking to the ground and letting loose a loud howl. Her overall stoicism might be due to her exhaustion from sleep deprivation, but she appears to be capable of controlling her emotions relatively well.

Tyzias might seem like someone that has issues letting others help her, but she has no trouble letting the player assist her in collecting her dropped books and papers, as well as allowing her fellow groupmates to complete their parts of their group assignment. Even so, she is still quite hard on herself: only allowing herself to sleep once a week so that she can study law, and barely giving herself any time off to relax.

Tyzias is described to have prominent eyebags that are tinted teal, and her smiles have a tendency of resembling grimaces most of the time. She does not appear to have any qualms swearing, unlike fellow tealblood Tagora.

Tyzias appears to deliberately leave her items (containing revolutionary ideas) in places where Stelsa can't ignore them, perhaps in a bid for Stelsa to acknowledge the biased power play and not pretend that everything is alright. Despite Stelsa agreeing to take the player's advice to practice open communicate with Tyzias, Stelsa still firmly believes that Tyzias is merely going through a rebellious phase that she has yet to outgrow.

When Stelsa makes her second appearance in Hiveswap Friendsim: Vol. 17, she is shown interacting just fine with Tyzias (who was at her place studying). When she accidentally kicks the player out right after saying that they could stay for dinner, Tyzias reminds her that the player is a guest, snickering all the while. Even so, Tyzias explains to the player that being schoolfed changes one's perception and manner of handling things, which sheds light on why Stelsa constantly feels the urge to pencil down details and appointments (even when the person concerned is already at the door). In short, Stelsa and Tyzias are supportive of one another and are more than happy to help the player in their time of need.

Daraya is introduced to the Tyzias by the player hoping that Tyzias might help Daraya channel her anger and hopelessness into something more productive. Daraya spends the entire exchange being rude and disrespectful, incensing Tyzias. Daraya eventually apologizes for her insolent behavior. After hearing more advice from Tyzias, Daraya decides that helping Tyzias out on her plans would be alright. The two agree to exchange numbers, then the player gets to hang out with the both of them for the rest of the night.

After Daraya is accused and a trial is suggested Tyzias suggest they use her defense idea which saves Daraya though she acts very apathetic about it.

Stelsa and Tyzias seem to be having some relationship issues due to Tyzias' radical ideas that Stelsa is worried about. Tyzias also can be somewhat rude to Stelsa to "ruffle her feathers" because is keeps things "interesting." It is unclear how Stelsa feels about this. However, they are shown to care about each other a lot with Stelsa outright saying she loves Tyzias. They also flirt and make sexual innuendos towards each other in the no deaths rout of the trial and seem to really enjoy doing the trial together. 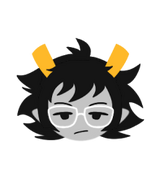 Tyzias' sprite from the trial