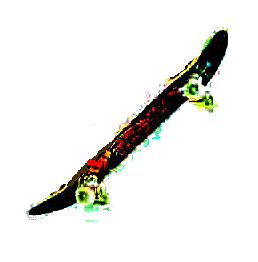 by alchemizing both his skateboard and a Hella Jeff drawing.

After being created, it proceeded to get RIDICULOUS air and has since been seen gliding through the clouds of Skaia.

Shortly after the UNREAL AIR had soared away, Dave duplicated it and had it captchalogued before it was able to fly away again. It seems to be one of the few items created with a SBaHJ poster that can interact with its enivronment (the SORD..... Dave made earlier was too UNBELIEVABLY SHITTY to manipulate intelligibly). The Unreal Air also requires no GRIST to construct.

It was later seen in Dirk Strider's room, and it is hinted that his Bro escaped on it after his duel with the Mirthful Executives. Later on, Dirk holds a conversation with Dave stating that Bro did actually fly off on a "shitty skateboard".

Unreal Air as seen being shredded by "SKATERBOARDER". This image can be seen at the bottom of the Sweet Bro and Hella Jeff comics.

Dave riding the Unreal Air to enter his First Gate.

This article is a stub. You can help MS Paint Adventures Wiki by expanding it.
Retrieved from "https://mspaintadventures.fandom.com/wiki/Unreal_Air?oldid=202077"
Community content is available under CC-BY-SA unless otherwise noted.