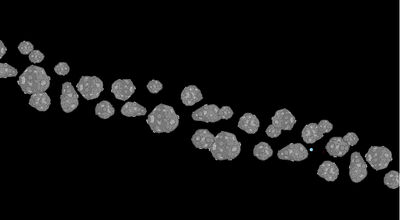 The Veil is a large ring of asteroids in the Incipisphere that forms the outer boundary of The Medium, dividing it from the Furthest Ring, the dark space in which Derse orbits.

Apparently the meteors contain buildings like labs, factories, and facilities for genetic engineering. The Veil is considered a neutral ground between the kingdoms of Prospit and Derse. The trolls were hiding on one of the few remaining meteors in their own session's version of the Veil when they trolled the protagonists. In every session, once The Reckoning is initiated, the meteors in the Veil are sent towards Skaia to destroy it, causing the apocalypse of the players' home planet when Skaia defends itself. The players have to stop the Reckoning before Skaia's defense fails and it is destroyed. 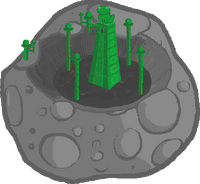 had assembled through various means. The lab itself contains several Ectobiology tubes where various Chess pieces are being created and/or held in stasis. In the lab, John also found a tailor-made Junior Ectobiologist's Lab Suit and 'another one of those four monitored house-shaped terminal thingies.' He used this lab to create the paradox clones of himself, Jade, Rose, Dave, Nanna, Grandpa, Mom, and Bro, using Ectobiology. Along with the Frog Temple's meteor, these eight humans were sent through Skaia's defense gates to land in their relative birthplaces pre- and post-scratch.

After their session was mostly destroyed, the trolls hid from Jack in their own ectobiology lab.

In the alternate future Terezi foresaw using her powers as the Seer of Mind, the trolls' hideout in their Veil was destroyed by Jack Noir after he followed Vriska's pixie dust trail in search of the remaining trolls.