Vriska Serket
Vriska's lusus
Vriska's hive is an elaborate castle-like structure with steeples, arches and a bridge connecting to a second tower. Her hive stands on a tall cliff, below which is a canyon where her Lusus resides in a giant web spun between the walls. It sports the typical grey exterior and 12 paned windows. Her windows appear blue from the outside. She has a spiraling staircase and a labyrinth of caves within the cliff that holds up her house, which she uses to hold the many treasures she collected from her Flarp sessions. Equius Zahhak lives in a neighboring hive on the opposite cliff, which is situated higher than hers.

that she doesn't actually like her hive since her tastes changed since when she built this hive.

The building was later expanded by Kanaya Maryam to reach the Seven Gates and eventually Skaia as required by Sburb, but was ultimately destroyed alongside Vriska's whole planet during Jack Noir's rampage.

Vriska's room is cluttered with broken 8 balls, d4s, d20s, and a few strange webs. She also has two old doomsday devices lying on the floor that she made for Eridan Ampora. She has many FLARP related items in her room, including a stack of rule books, spreadsheets on the wall next to her computer desk, and a self portrait of the role-playing character she uses in FLARP sessions named "Marquise Spinneret Mindfang", modeled after her ancestor. 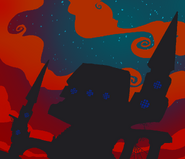 This article is a stub. You can help MS Paint Adventures Wiki by expanding it.
Community content is available under CC-BY-SA unless otherwise noted.
Advertisement