In The Homestuck Epilogues[]

From the reader's point of view, Vriska's story in The Homestuck Epilogues picks up from where her Canon biography ended.

containing the Juju. She stands off to the side, waiting for the door on its surface to open and defeat him. As Vriska stares down Lord English and judges his gaudy appearance, Meenah tells her she's returning to the army and invites Vriska to join. Vriska wants to take a minute to await the Juju opening, so Meenah simply gives her a grin, salutes, and leaves. Vriska is excited to be at the end of the universe, and Lord English puts another crack in reality as she watches, impressed. However, she is abruptly knocked back as one of the falling shards of reality hits her hard in the head, but she braces through it, crying laughing. Tavros asks if she's okay, and she puts a hand to her wound to find that one side of her head is entirely soaked with blood, and spreading. Her head is spinning, but she clings to denial and rage. Tavros tries again to help her, but she pushes him away and tells him to go find Meenah. He obliges, running off to join the rest of the army.

Vriska is still straining to focus on the battle, to take it all in, when she notices a message notification in her glasses from Terezi. She has no idea how long it's been there, but ignores it. Without Tavros there to ground her, however, she quickly finds herself lifting off the ground, and realizes the black hole is pulling her in. Her gaze snaps to the Juju again, obsessed with seeing what happens despite the blood in her eyes, waiting, wondering where Meenah is. She tries desperately to touch back down on the ground, to reach out to the Juju, to no avail. As she flails, another shard pierces her in the chest, sending her faster into the singularity. Vriska is horrified as the reality of her fate settles in, and she screams as she falls into the black hole entirely, moments before John finally emerges from the Juju.

In Homestuck^2: Beyond Canon[] 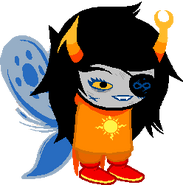