Wandkind is a strife specibus used by Calliope. It is also likely to be used by Eridan Ampora after abandoning his former weapon. In Recap 2

, the Quills of Echidna are referred to as wands, and it is likely that Rose's Needlewands and Thorns of Oglogoth also belong to both Wandkind and Needlekind. Further blurring the line between these two Specibi is the Handmaid's use of two magic wands, which she also used as stabbing weapons at least once. Calliope uses this kind abstratus, along with pistolkind.

A powerful wand fueled by White Magic Science (as opposed to Rose's Dark Magic). It was alchemized by Kanaya from unknown ingredients because Eridan would not stop bugging her about teaching him the secrets of magic. Eridan himself insists that it is not magical and is in fact very scientific.

It was used to KO and blind Sollux Captor, kill Feferi and Kanaya and destroy the Matriorb. However, it was debunked right in half

by furious rainbow drinker Kanaya, who then gave its owner a similar treatment.

It seems to be a very powerful weapon, being stronger than Ahab's Crosshair. Eridan, using the rifle, didn't manage to defeat Sollux while they were duelling in the Land of Brains and Fire. The wand, on the other hand, easily KO'd Sollux and blinded him during their second round in the veil.

Doc Scratch later implies that the wand was in truth essentially useless and that Eridan's powers were related to the Angels of LOWAA. This may or may not have been foreshadowed by the visual appearance of the wand which is, in fact, a replica of Hermione Granger's wand from Harry Potter Lore, being a toy with a light-up end.

Two small pool cue shaped wands used by the Handmaid, primarily to perform "clockwork majyyiks", granted to her by Lord English. She has, however, also been seen using them as stabbing weapons. When she is not using them as weapons, she uses them to put her hair up in a bun. 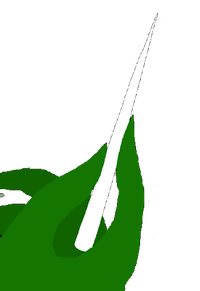 A simple white wand, wielded by Calliope. It looks similar to the one used by Calmasis from the Complacency of the Learned book and movie series. Its double is the White Magnum, and Calliope needs to reload the wand with bullets if she wants to use its magic. It would appear the wand is currently in Lord English's possession. He used it to unleash a devastating beam of energy that wiped out an entire dream bubble and all of its inhabitants.