5 and a half Alternian solar sweeps/11 Earth years

Surrounds her words with []Book pages[] and capitalizes Ws.

Her first name is a reference to the giant spirit owl named Wan Shi Tong who owned an extensive library in Avatar: The Last Airbender. Wanshi could be translated in Chinese to "everything" (万事, Wànshì, lit. 'thousand things'), referring to how she knows 'all of it'. Her last name means "child of Aditi" and is another name for the sun god Surya. It could also be translated to "Adiposis" which means overweight.

Her leaked placeholder name, "Book Girl", refers to her love of Soldier Purrbeasts and other books.

Wanshi is a jadeblood living in the brooding caverns, presumably spending her time reading Soldier Purrbeasts books and managing jade duties. In the events of Hiveswap Friendsim: Vol. 15, the player meets Wanshi in a bookhive.

If the player asks whether she's seen the brain room, Wanshi will excitedly insist that you take her there to have a peek. She gets upset upon realizing that the room is off-limits, and she reveals that the real reason she isn't in the caverns right now is because she wants to attend Beastcon. Should the player pretend that they would take her to the convention, Wanshi eagerly runs out of the bookhive with the player. Worried about possible dangers, the player decides to take Wanshi home, using a meandering route to hide what's actually going on. The player eventually reveals that they never meant to take Wanshi to Beastcon due to danger, which puts a damper on her cheerful mood. After learning about the disaster that took place at the convention (an attraction had gotten free and was slaughtering attendees), Wanshi thanks the player for indirectly saving her life and calms down a bit. To cheer her up, the player offers to be her new friend, and Wanshi begins explaining Soldier Purrbeasts in earnest. She tries to roleplay with the player, but is disappointed with their lack of knowledge on the subject. She eventually is led back to the caverns and gives the player her personal copy of Soldier Purrbeasts, completely ignoring a furious Lynera.

If the player asks whether Bronya is nearby, Wanshi scoffs at the player for being a snitch before leaving. The player tries to find her once more, but she is nowhere to be found. Should the player take her to Beastcon, Wanshi will delightedly rush out of the bookhive. On the way there, both Wanshi and the player stumble upon a corpse. Not knowing how to process what she saw, Wanshi spends a few moments observing the cadaver until the player guides her onwards. Upon reaching convention grounds, Wa

nshi is more than eager to meet up with fellow Soldier Purrbeasts fans while the player is suddenly nervous about the whole thing. Things go horribly wrong when a cholerbear breaks loose and starts mauling attendees viciously, the creature lunging right for the player and Wanshi. Frightful, Wanshi turns to the player, only for the player to give her a quick hug before tossing her into a bush. The player manages to slay the cholerbear, but gets pinned under the animal's crushing weight as a result. Dusting herself off, Wanshi gives the player a sad look.

Wanshi is a fan of the book series Soldier Purrbeasts, and writes a lot of fanfiction for the series. Her fanfiction is popular amongst readers, and Wanshi is quite proud of her achievement. The entire reason she snuck out of the caverns in the first place is to attend Beastcon to meet up with fans of hers and make new friends. Judging from her ability to write captivating stories and love for reading books, she can be assumed to be quite intelligent. She also partakes in role-playing games, and gets right into the spirit of things almost immediately. When the player's lackluster attempt at playing with her becomes a minor issue, Wanshi gives the player several pointers and also lends them her personal copy of Soldier Purrbeasts so that the player could be more familiar with the lore, hopefully improving their role-playing skills in the future.

She is noted to be quite cheerful in nature, which might be linked to her relatively young age. When the player informs her that they can lead her to Beastcon (irrespective of whether the player is actually lying about the entire thing), Wanshi whoops and claps her hands in clear joy. While she is indeed friendly to people, treating her like a helpless child seems to irritate her somewhat. When the player inquires whether Bronya is nearby, Wanshi frowns at the player's snitching ways and disappears. While she is young, she knows well enough to not follow strangers anywhere; she states that the only reason why she agrees to go anywhere with the player is because she knew who they were.

She also expresses a distaste for people that lie to her, adults in particular. She outright says that people usually don't tell her the full truth, thinking that they can make decisions for her solely because they believe they know better. What she finds especially infuriating are the sort that don't expect her to notice that they're lying to her face. Even though she's extremely upset that the player deprived her of her one chance at having fun, she still appreciates their honesty.

Despite not feeling overly resentful of her life in the caverns, Wanshi feels restricted by the limitations of the cavern. When walking with the player, she shows evident wonderment at all the little things in her surrounding environment, occasionally giving commentary for her numerous observations. She mentions that sneaking out is commonplace for young jades as they want to see new things, though she had refrained from doing so to stay out of trouble. Her keen observation skills aren't just limited to mundane things, she also takes note of rather darker elements in Alternia. When she and the player happen upon a corpse, Wanshi falls silent and spends a few moments taking it all in. While she later states that she doesn't quite understand what it all meant, the player ultimately decides that processing what she saw was probably done elsewhere, not with a stranger while walking past the woods.

While Wanshi is one of the younger trolls introduced, she doesn't mind swearing on occasion (either by her or by other people). When the player amends their rough language, Wanshi bluntly tells the player to not patronize her, then proceeds to repeat after the player to show her eagerness regarding the entire matter. Even so, Wanshi remains polite and friendly to everyone she meets.

Wanshi has a tense relationship with fellow jade Lynera Skalbi, who acts as her caretaker and gives her lessons in the brooding caverns. However, Wanshi finds Lynera's lessons (which she mentions to include a lot of yelling) to be boring, causing her to sneak out of the caverns. Wanshi seems to know that Lynera holds Bronya's opinion in very high regard, though it is unknown if she knows the full extent of what's really going on. Lynera, though she seems visibly irritated with the young troll, was very worried for her when Wanshi ran away. Though she tries to cover this up by claiming she was worried she would get in trouble, the MSPA Reader understood that she secretly cared for Wanshi. In Wanshi's good ending, Lynera could be seen watching her and the player from inside the caverns.

Wanshi mentions a male jadeblood (most likely Lanque Bombyx) who would roleplay with her in the brooding caverns, who also shares her interest in "purrbeast caste drama", albeit less upfront about the fact than Wanshi is. Wanshi claims that he acts like he's too cool to care about that stuff, even though she's absolutely certain that he's very invested in the whole thing. 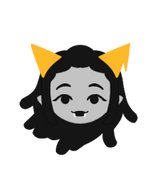 Wanshi's sprite from the triall

Retrieved from "https://mspaintadventures.fandom.com/wiki/Wanshi_Adyata?oldid=245002"
Community content is available under CC-BY-SA unless otherwise noted.