Most of the political steam comes from Pickle Inspector's Quest of Spirit, stealing Elf Eggs for the Weasels from the Elves, who promptly cry Elf Tears.

The Weasels are aligned with Pickle Inspector and granted him a boon when he completed his Quest of Spirit, which allowed him to pass through the Weasel bust and gain awareness of his Female Alter Ego.

After a long while of doing nothing, the Emissary finally made a reappearance towards the end of the adventure. He appeared in a colorful field, where he wed Completely Sane Man and Wifehearst. He once again flipped out when he realised that Bathearst had not brought the ring for the ceremony.

The Weasel King is, unsurprisingly, the leader of the Weasels. Problem Sleuth is given the ability to summon him after solving the plight of the four kingdoms. He is arguably the most skilled user of the ancient weasel technique of Flipping the Fuck Out. He is so skilled in fact that he can flip out in other ways, such as when he uses his Kingly Wisdom to Ponder the Fuck Out in an attempt to determine a solution to the eruption of Mount Saint Lardass. He dwells in the Enchanted Palace.

He can commune with the CHOSEN ARBITOR while Sepulchritude is active, enabling the most powerful Battle technique in existence: Final Flip Out.

It is unknown if the Elves, Hogs, or Clowns have similar leaders, but it would be really fucking cool, wouldn't it? (The Clown Pontificate summoned by DMK could perhaps be the leader of the Clowns.)

In the Epilogue, the Weasel King is married to Madame Murel. 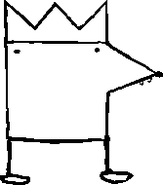 The Weasel King
Community content is available under CC-BY-SA unless otherwise noted.
Advertisement