He somehow ends up in the Frog Temple and enters the Lotus Time Capsule spawning a second blooming, the first holding Dave's copies of Sburb to be retrieved by Jade in 2009. He later emerged from it in 2422. Before entering, he reads Complacency of the Learned and seems interested in it. His new exile name is Writ Keeper, which has the same initials as White King.

On exiting the Capsule, he is welcomed by the Windswept Questant - and then murdered by Bec Noir, shortly (about ten seconds) after Noir's exit from his own Capsule.

While the White Queen seems to generally take care of ruling Prospit on the home front, the White King is on the battlefield, leading the troops against the forces of Derse and the Black King. What he does in times of peace is unknown, if there are indeed times when Prospit is not embroiled in conflict with Derse.

In the post-Scratch session the White King was killed early on, when the Courtyard Droll blew up the Battlefield.

Statues of the White King and Queen in [S] Seer: Descend

The Writ Keeper discovers and reads Complacency of the Learned 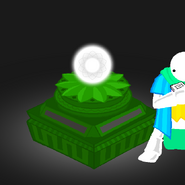 WK at the time capsule, shortly before entering

WQ and WK, upon his exit from the capsule 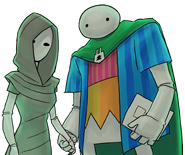