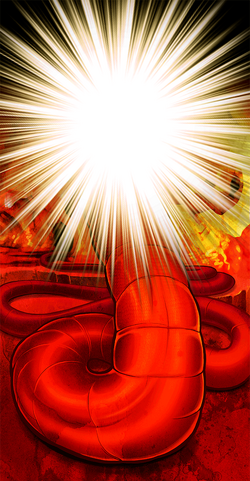 , the self-proclaimed god of all monsters, is Dirk Strider's denizen in the Land of Tombs and Krypton, who shares a name with Dirk's browser of choice. He is also Caliborn's denizen, appearing in Earth's core after Caliborn brought Earth into his session. Yaldabaoth is the rarest, most powerful, and most inhospitable of the denizens, and is “usually designated for the most naturally gifted warriors”

. Additionally, it is implied that (due to his extreme nature and difficultly) he is often assigned in dead sessions. According to Aranea, he is "notoriously inhospitable" and is known for offering extreme Choices.

Yaldabaoth was seen in person when Caliborn talked to his denizen, making him the first denizen to appear on screen in the comic. He has the body of a giant red serpent and his head is either obscured by or made of a bright light comparable to that of a sun, closely resembling the symbol of the Light Aspect.

Yaldabaoth is a demiurge in the Gnostic school of philosophy that is a being who created and maintains the physical universe. Gnosticism requires a demiurge because it postulates that God, being perfect, could not create the imperfect world that humans inhabit. Yaldabaoth is the creator of man, and is depicted as having the face of a lion and the body of a serpent, and he is also associated with fire. He is described as being half-flame and half-darkness.

Dirk's chumhandle "timaeusTestified" references the concept of the demiurge, as it was first put forth by Plato in his dialogue Timaeus. However, the concept of Yaldabaoth is by nature from an offshoot of Christianity, making it an oddity amongst six of the seven other Denizens (excluding Abraxas, Jake's Denizen) who are named after classical Greek mythological figures.

Not much is known about Dirk's interaction with Yaldabaoth. A statue or minion of Yaldabaoth, comparable to the Typheus minion in Jade's house, is seen in the Act 6 Act 4 Flash on the Land of Tombs and Krypton. Later the same statue of Yaldabaoth is found by Dirk and John, destroyed as a result of LOTAK crashing into LOMAX. Its face appears bronze and is no longer glowing.

Yaldabaoth appears in the core of future post-scratch Earth when Caliborn enters the Medium, becoming its denizen. Once Caliborn found and unlocked the door to his lair, Yaldabaoth gave Caliborn The Choice: either take a passive role, sacrificing his life for the power to stop a great force of evil, or gain immortality and unlimited power to cause destruction, after a series of difficult trials. Caliborn, of course, chooses the latter. Once he accepted these terms, Yaldabaoth initializes a long process which involves Caliborn conquering and destroying several planets. Once he had destroyed them all, Caliborn's true land would be unlocked, the dead Earth brought back to life. Earth at this point would be renamed to the "Land of Colors and Mayhem". Finally, Caliborn would have to face Yaldabaoth in combat, and if successful, would receive unconditional immortality and a limitless supply of destructive power. Aranea explains this in Act 6 Intermission 4

Yaldabaoth's door is surrounded by various carvings. Above it are a pair of sillhouettes similar in appearance to Echidna and a number of Time gears (because Caliborn is a Time Player). Even more curious is the shape of the carving around the door itself, which has the same silhouette as Doc Scratch's grandfather clock, and the rooks in Calliope's chess set. Furthermore, the pillars to the left and right of the door feature the same imagery as the lower half of the grandfather clock: female figures with twisted serpentine legs, a possible reference to Echidna (though she lacks arms).

In Act 6 Act 6 Act 5 it is revealed that at some point Caliborn successfully killed Yaldabaoth, or at least he did in whatever timeline we are observing in this act. The battle between Caliborn and Yaldabaoth is shown during Collide. A beastly face shows through the bright light on occasion during this battle, and upon being killed, the light of his head fades out, leaving an underlying Light symbol-shaped head visible.