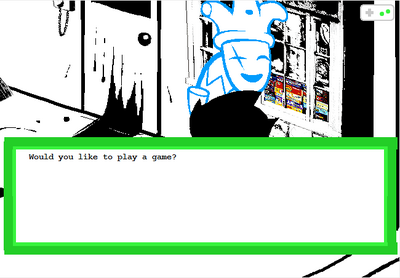 is the first explorable-style flash sequence in Homestuck. It follows John's exploration of his house just after entering the Medium and occurs not long after his first appearance in Act 2. Unlike most later explorable-style flash sequences, this flash lacks a definite end point and the user must choose to end the sequence on their own. It was programmed by Gankra, and was the First instance of Trickster Mode, being the Flash that taught the Trickster Code. In the kitchen is Death's game cabinet from Problem Sleuth. This page contains what is possibly the earliest reference in Homestuck to the Saw movies, "would you like to play a game?"

In Trickster Mode, you are given full access to the whole map. If you use the WASD keys or the arrow keys, you can reach the separat yard section on the left, where the tickster code 029413 is written in morse code and absolutely no pumpkins are nearby. You can also get to the top of the house. If you go to the right you will find text that says "Gankro [sic] Was Not Here". Above the chimney opening, it says in white text, "this is not SAFE". If you click on the chimney, a bar will pop up saying SHENANIGANS. When clicked, you will teleport into Problem Sleuth's office, where you can explore.

If you exit Trickster Mode in a normally inaccessible position, attempting to move will crash the game. In Chrome, the game will sometimes start in such a state. Holding shift and pressing refresh will fix the bug.

If text is overflowing from the side of the text spaces, check your browsers zoom and DPI levels to make sure that they are set to default.

Retrieved from "https://mspaintadventures.fandom.com/wiki/You_There._Boy?oldid=228812"
Community content is available under CC-BY-SA unless otherwise noted.